Relationship Between the Values of Digits & Powers Of 10
Learning Targets:
**I can explain the relationship between the value of digits in numbers to the millions down to the thousandths place values.

Understanding the Relationship of the Value of Digits
Please note they can also write this relationship a THIRD WAY and will be EXPECTED to know this for the assessment:
WAY 3= .01 is 1/1,000 (written in FRACTIONAL FORM) of the value of 10.

Review of Relationships Between Digits in a Number
Or...go to learnzillion.com and click in code: LZ2676

During this first quarter we will  be learning about/reviewing patterns and strategies in multiplication.  We will begin by focusing on Place Value (the relationship between the values of digits in numbers) and the Powers of 10.  This was touched on in 4th grade. 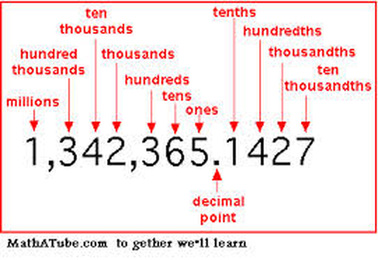